This is still a Knitting Blog!

Yes, it is. Sometimes. Between all the kids fun, gardening, raw food cutting, blending, juicing, eating, yoga, reading, family life and SLEEPING, there are still those knitting moments. Not as much as they used to be (hey, it's summer), but also not as much needed (as in a very, very urgent and lifesaving way).

Started in February, my magical pink 2-at-once-socks came off the needles recently. 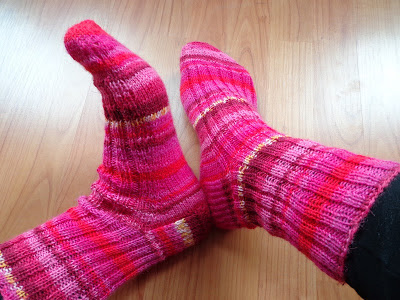 What I have learned:
- knitting two socks at the same time (obviously) on two circular needles does prevent second sock syndrome, but doesn't necessarily turn out a pair in a shorter time
- to get started I used this video tutorial here by VeryPink Knits (love the name!)
- further on I followed the yarnharlot's basic sock recipe from her book Knitting Rules! 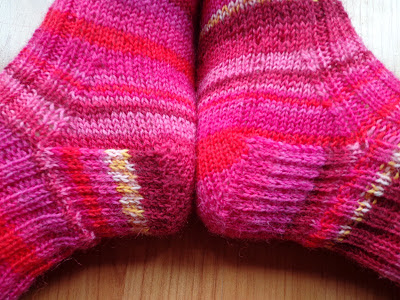 - for the heel I also used the yarnharlot's directions, using the Eye of partridge heel for the flap to make it sturdier (and for fun, as I have never knitted it before)
- one more interesting thing about turning the heel in, I would say, the "North American way": a new method for me as well, but very common in the US and Canadian pattern I found out - in Germany it is called "Herzchenferse" meaning "Little Heart Heel"... 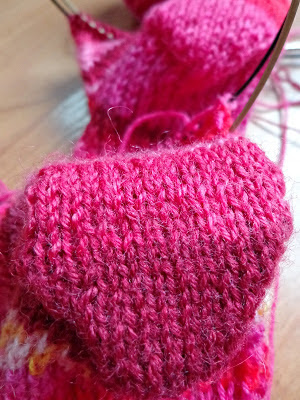 - I did some research on heels and found this page here, just to see that the standard heel people knit in Germany is called Dutch Heel in the US, while the there is also a German Strap Heel I have never seen... 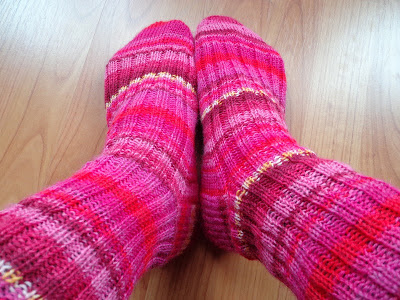 What's next? Knitting two socks on ONE long circular needle, of course.
Posted by catcouch at 12:52 PM 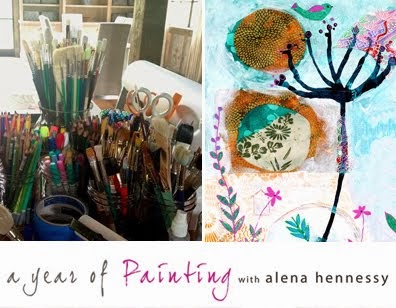